“The passion and intensity was a joy to watch” | RIASA A vs. Tadcaster Blue

In what was a big ask, which started Monday evening, to play two games in three days is a mammoth task to pursue.

Before discussing the game particulars, we should all be proud of what Riasa A accomplished this week, outstanding effort.

Now to the game, which we started really brightly, continuing on from Monday’s second-half performance, playing pressure to Tadcaster from the very start. Defensively we began the game on the front foot and controlled everything Tadcaster had early on.

Going forward we looked potent and dangerous, even though opportunities came and went, it was good to see the confidence flowing and the teamwork rate to press high up winning possession back in good areas.

The best chance early on came to Tyler Welch after some really good link up play through midfield found him picking up possession between the centreback and fullback with only the keeper to beat, unfortunately, the shot went over the bar.

Ethan Krabbendan at the other end was as controlled and decisive as I have seen him, he dealt with crosses and the long throw Tadcaster use (barbaric Football) with ease, he made two great reaction saves to keep the game at 0-0. (we should have been in-front at this point).

Our goal duly came after some sustained pressure and good work down the left side by Heard and Welch, Welch cut inside and Slipped the ball to King, one touch to control and a great low drive across the goalkeeper into the far left corner, (what a finish) 1-0 thoroughly deserved.

I sensed a desperation from Tadcaster from the resulting goal (only lost two games all season). The half continued with us dominating again even though Krabbendam was called into action once more.

Just before halftime we could have doubled our lead through a corner, Griffin found himself free to volley, but just missed the target from 10 yards. Halftime and deservedly in the lead.

We knew that Tadcaster would start with an urgency playing in the final third with early balls forward in search of the equalizer, we were ready. There was something about this half that I’ve failed to see enough of, togetherness. Everyone doing their bit and giving everything to succeed as a group and unit, the passion and intensity was a joy to watch.

Even though as the half went on and possession was dominated by Tadcaster we continued to control the game, Bartlett Springer, Ramsey, Heard and Byse dealt with everything that the opposition threw at them, what a defensive display. (Tadcaster went with 5 strikers in the final 10 minutes) In front of them, Berhanu ran and ran till he had nothing left as too did Trask and King.

Added to that, the three forward players looked threatening on the counter-attack and brought some good opportunities the longer the game went on. Tadcaster continued to knock at the door but the answer was the same each time: “not today”. Krabbendam was called into action with about 20 to go, making another great save.

Chances came and went from both sides, again I think we had the best clear-cut chance, brought about by the movement of the front three, Vankundre firing a great cross with Spencer inches from converting at the far post.

Throughout the second half, a quiet confidence was oozing from everyone involved, the final whistle is blown.

One response to ““The passion and intensity was a joy to watch” | RIASA A vs. Tadcaster Blue” 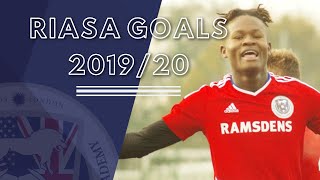