The student-athletes were excited to play their opening game of the China International Junior Football Championships.

After spending 2 days settling in and getting used to the Shenzhen heat, the team were ready to put in a great performance to kick-off the tournament as they mean to go on.

Led out by captain, Angelo Calfo, the RIASA starting 11 began the game with tempo – forcing an early own goal by Changchun Normal University at the 7-minute mark to grab an early lead (1-0). Taking that momentum, RIASA pushed the pace of the game upwards to grab their first goal scored by a RIASA player of the tournament in the way of Belgian Striker, Phillipe De Leiderkerke in the 18th minute (2-0).

RIASA continued to dominate the possession for the remainder of the half and scored a third at the 34th minute from a Dean Phillips corner, Immanuel Kinuthia put it in the back of the net (3-0). Following the goal, RIASA went in at half time with the lead.

However, although RIASA were dominant, coaches Rob Jones and Billy Paynter believed that the team were not playing to the best of their ability and employed them to sharpen things up for the second half.

After stern, encouraging words from the coaches, the team were ready to step things up. The second half took some time to get going, momentum was stagnated due to substitutions, stoppages and the natural state of the game. That was until the 64th minute when Colin Clarke turned his defenders inside-out, resulting in a clear penalty for the striker. Clarke calmly stepped forward and covered the PK (4-0).

Changchun’s fortunes were not showing any sign of turning as they conceded yet another own goal in the 66th minute (5-0). Rubbing salt in the wounds of already defeated team.

But RIASA weren’t quite done yet. In the 76th minute Immanuel Kinuthia found an opportunity to extend the lead to 6, ending the scoring in a game that RIASA never looked like losing (6-0). 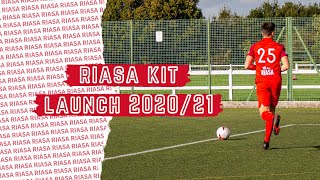